I Climbed a Mountain – How it all began

In 2013 I went to Morocco ,not thinking anymore than it would a bit of an adventure for a good cause and give me something positive to focus on.  It turned out to be much more ………

Six years  ago I was not in a good place. Plagued by health problems, (Rheumatoid arthritis and Fibromyalgia) feeling inadequate and depressed, worried about my son who has Duchenne Muscular Dystrophy and grieving for what was lost with his diagnosis, sad the future was not going to be anything like what I had imagined.

Clearly a change had to occur. An opportunity was given to me through a charity challenge organised by Muscular Dystrophy Australia. The challenge? Climb the highest mountain in North Africa, Jebel Toubkal in Morocco. Why not? I asked myself. Its only 4,167m. I did a quick search and looked at the terrain and the route we would take. It didn’t look too difficult and not only would I get to raise money for something close to my heart I felt sure it would motivate me to change . I could do this. I had trekked in Nepal. I had been higher . How easy it is to forget the fine detail! Yes I had trekked . In fact I had three trips to Nepal. Never mind that the last trip had been 20 years earlier, and I conveniently forgot my succeptibility to problems with altitude over 2500m. It would be fine . I had 9 months to prepare and reach the fundraising target

So I started training. Walking as much as possible up as many hills as I could find. I was dismayed at my low level of fitness but plugged away mixing up my activities with swimming and bike riding. Then another blow. For sometime I had felt like my ear was full of water. I put it down to the swimming . But no, that wasnt it. The vertigo attack was sudden and for two days I was incapacitated. A visit to the doctor saw me referred to an ENT specialist. But that appointment wouldn’t be for months. In the meantime I battled on with vertigo attacks and in between feeling completely unbalanced. My training had stalled.
Finally at the ENT clinic I had a diagnoses. Menieres Disease, no cure, and treatments were hit and miss. I was told that the disease is unpredictable, my hearing loss would not recover, and I would have more vertigo attacks. I could try vestibular therapy to compensate for loss of balance, but then again also I might go into remission. This on top of the RA and fibromyalgia, I did not need. Whether by sheer luck or my rigid adherence to a low sodium diet I did experience an abeyance of the disease. I was back on track with the program, but seriously behind in the schedule.

I arrived in Morocco in early May 2013, underdone but determined I would give it my best shot. How blissfully unaware of how underdone I was! Three days of trekking to the refuge were tough. My enemy, altitude, was making its presence felt, even though the refuge is only 3200m, my body had started to rebel. Fatigued and with no appetite and unable to force much food down my throat, the odds were against me. And they played true. A couple of hundred metres into the climb I knew I would not go on. My legs were a dead weight, I had no fuel in my tank. Tearfully I called it quits. Rachid, sensing my distress tried his best to instill some confidence in me that I could go on. But to no avail. So he made me a promise then and there. If I came back to Morocco he would get me to the top. Sad and defeated I went back down to the refuge. So much for making a change I thought. In my self pity I failed to acknowledge what I had achieved.

Here I was ,well past my youth, overweight, unfit, depressed and suffering some serious health problems thinking I hadn’t done anything. But on reflection I had. I had raised a substantial sum for MD research. I had tried my hardest and despite everything still managed to complete some difficult trekking . But most importantly, on a personal level, I had committed myself to the unknown, entered the territory of fear , survived and came out stronger.

Fast Forward 2014. It still rankled that I didnt get to the summit so I decided to return in April 2014. This time I was more prepared, fitter and trained harder. So much so that I managed to tear a hole in my achilles tendon. It wasn’t going to stop me! Even though my sports physician expressed doubt that I may not heal in time, despite throwing every treatment at me. He was right I didn’t heal completely, but I was confident that because I was fitter I would be ok.

I was right. I got to the summit. I can’t say it was easy. Toubkal is challenging for anyone But I took it slowly, had pain relief on hand and when the swelling was too much, took my boot off and put my foot in the snow! I climbed a mountain!  Literally and metaphorically.

Out of all this the seed of an idea was planted and together with Rachid we started Nomad Journeys with the intent of giving people opportunities to experience Morocco in a way that does not follow the usual path of tourism, that is with immersion rather than just observation. Our other objective is to keep it local so that the Moroccan people will benefit, so we employ only local people so their communities also benefit. Morocco has given me so much , it is only right that I give back.

2018
My health issues have not gone away but I look at things in a different light now. I still trek, as well as doing stand alone tours  and will continue to do so .My inspiration comes from my son, as I watch his daily struggles with a disease he has no control over, attend University to gain an Arts degree despite progressively getting weaker. His doggedness and determination are amazing. Never complaining, he is the brave and inspiring one. 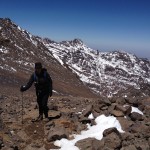 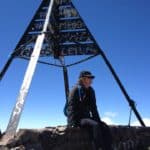