An exciting excursion across the high Atlas.

Ouarzazate is a city isouth of the High Atlas mountains.  It is known as the gateway to the Sahara. Getting there requires a drive across the Tizi N’ Tichka pass which reaches an elevation of 2260 m which offers spectacular views of the Atlas mountains. Ouarzazate has established itself as the movie making centre of Morocco. It was here some of Lawrence of Arabia was filmed. Visit the beautiful and partly restored Taourirt Kasbah, Option to visit Atlas Film Corporation studios if time permits.

A short drive from Ouazazate will take you to Ait Ben Haddou an ancient fortified city on the former caravan route between the Sahara and Marrakech. It has been listed as a UNESCO World Heritage Site since 1987 and has been the backdrop for many movies that include, Gladiator, Jewel of the Nile and Lawrence of Arabia 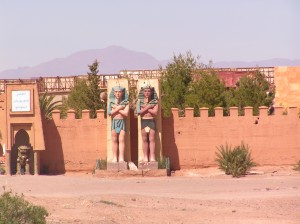