Ali was one of the muleteers that trekked with me in the Saghro. Of indeterminable age, he was the elder in our small group and was respectfully referred to as D’ali. Although he and I shared no common language, that lack did not prevent us from communicating.

This delightful kindly gentleman made my wellbeing his concern. Every evening when I arrived at camp he would get a blanket to pad the any hard surface that I would plant myself on then check if I was ok and that I was warm enough, always getting that extra blanket to wrap myself in. At dinner where we would share a communal tagine, he would encourage me to eat more and push food my way . He must have observed my clumsy efforts at picking up food with bread, but there was never any derision or laughter from him .

On the trail he would often wait for me and Rachid to appear and walk with us for a time . His joi de vivre evident . He always had a stick and mostly he carried it across his shoulders , his light footed nimbleness belying his years. This was apparent on one occasion when ,Rachid  ahead of me, Ali suddenly appeared . Putting his finger to his lips asking me not to make a sound, he came up to me and grabbed my hand. Together we ran up the trail, his grip firm so I had no choice but to try and keep up with him. I guessed his intent and we were laughing silently as we came up behind Rachid and Ali announced his presence. I guess it was a Berber version of Boo!

Ali never slept in the tent or shelter, preferring to light a fire and sleep outside, even though the nights were bitterly cold. He seemed immune to any discomfort . Come the last day at the guesthouse it was time to say goodbye. I shook his hand and said au revoir, only to find the tears welling in my eyes. Ali looked at me, smiled and gave me the biggest bear hug, and still smiling walked outside to load his mule and then make his way back to his village.
Sometime later after showering, I went outside to sit , hoping the afternoon sun would dry my hair. I was suprised to see  D’Ali still there, loading his mule. So I sat and watched , engaged by his methodical packing. Surely he has done this countless times. Finally finished he saw me sitting there. I waved goodbye but he walked towards me, beaming, arms widespread and hugged me again. Au revoir he said and turned on his heel , grabbed the lead rope of his mule, and walked through the gate, still smiling. 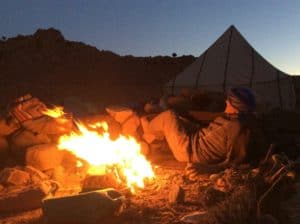